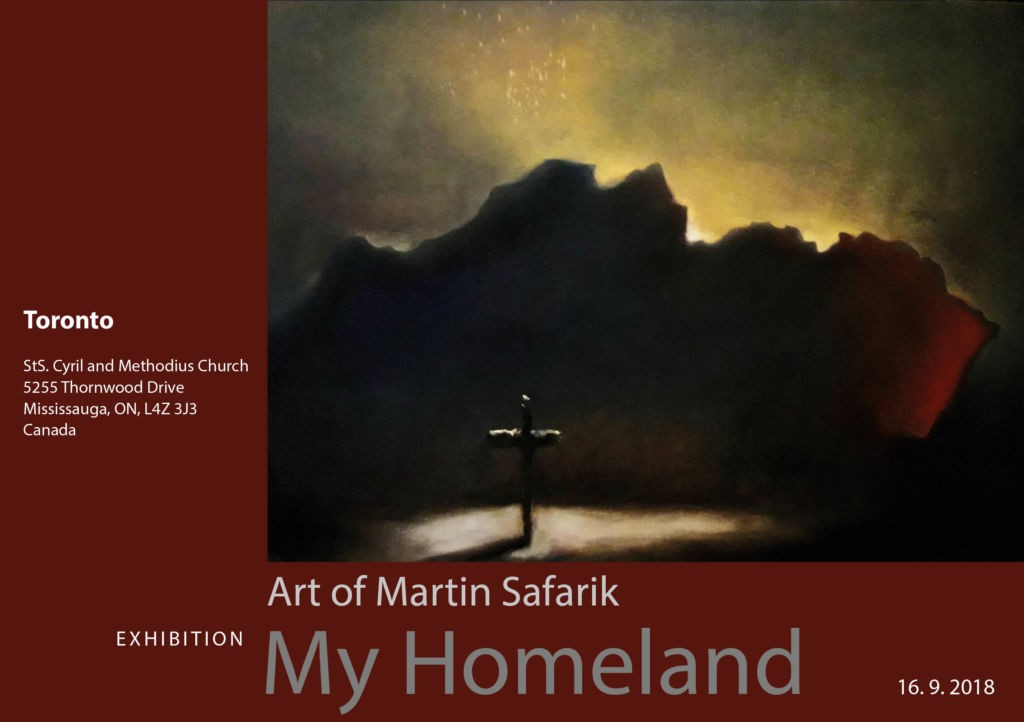 Martin Šafárik (1983) is a young Slovak priest who simultaneously studied opera singing and received private tuition from a well-known Bratislava painter Pavel Potoček. Over the period of the last five years, five solo exhibitions presented him to the public as a creative exponent of spiritual work inspired by Christianity, and an artist with an extremely sensitive approach to the complex issues of human existence, responsibility and faith.
The current show held under the title “My Homeland” is the first of a series of the artist’s exhibitions reaching beyond the borders of Slovakia. It is dedicated to the European Cultural Heritage Day. The ambitious goal of this international event, held in 49 countries in Europe, draws attention to the cultural heritage, identity and spiritual roots of different nations. Martin Šafárik has taken on this enormous challenge and expressed it in his latest paintings.
The artist admits drawing much of his inspiration for the new paintings from the messages of Pope John Paul II who placed emphasis on Christian roots and European history, on the important role of Slavic nations capable of showing deep religious devotion and sharing the spiritual wealth with the others. Pope John Paul II paid special attention to Slovakia and on the “ad limina” visit to Rome in 1996, emphasised that “Slovakia has an irreplaceable role in building Europe in the Third Millennium”.

The latest works by Martin Šafárik reflect the concepts of homeland, nation, faith, as well as national pride and humility, hospitality and, above all, the awareness of one’s own identity in Europe. This spiritual message from Slovakia to the world interpreted by universal symbols and metaphors blends a number of meanings: the Cross as a universal symbol of Christian faith and life, the double cross as a symbol of the Nitra princedom and the Great Moravia and part of our national coat-of-arms, and outlines of our homeland evoking a fixed point viewed from infinity. However, his paintings also feature fragments of Čičmany motifs that can be interpreted as a sign of hospitality and return to the national roots. The ever-present clouds and outlines of mountains evoke open space and the character of our country and its inhabitants, as well as the magically impressive face of Christ reminiscent of the artist’s unshakeable religious faith. Symbols and signs are complemented with colour symbolism. Grey as a symbol of spirituality is juxtaposed with gold pigment adding grandeur. The painter also uses black to add a touch of drama, and the colours of our national flag, endowing his paintings with life and distinction.

Collage is a new element of his painting. He incorporates into his pictures real authentic documents and correspondence from tragic war years. This opens up an infinite realm of imagination, metaphors, and parables encoding the history and future of our small country.

The latest paintings by Martin Šafárik indicate that he temporarily abandons the subtle range of broken colour tones in favour of darker hues and a more expressive style, using the light as an element enhancing the dramatic effect of his paintings. The sense of mysticism and mystery remains, but it is much clearer. Despite the shift towards the boundaries between reality and abstraction, we perceive his paintings as spiritual messages. Their potential is enhanced by the power of the artist’s personality combining determination, sacrifice and priestly faith with imagination, emotion and creativity.